Kevin Sheedy and a Footballing Dynasty 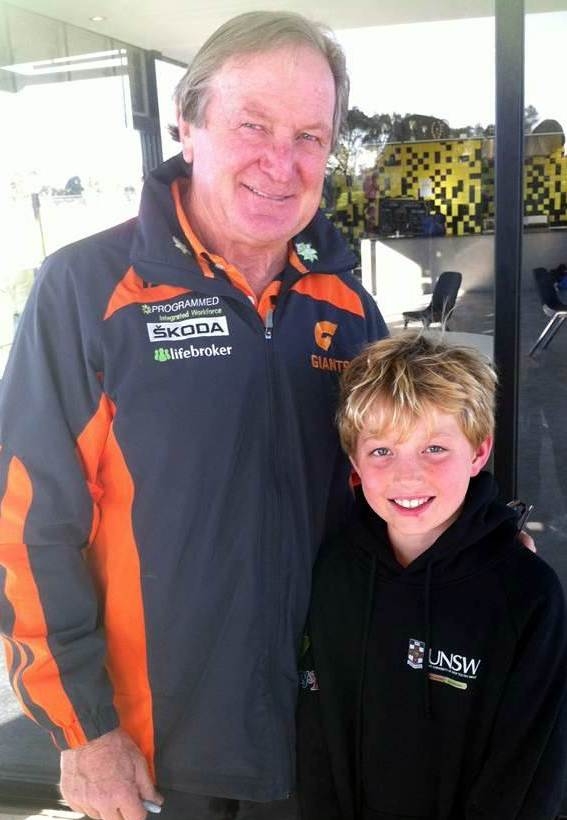 At our AFL coaching camp at the University of NSW in Sydney last week, camp participant Tyler Robert Davis had the pleasure of meeting current Greater Western Sydney coach and AFL legend, Kevin Sheedy. What makes Tyler Robert Davis meeting Kevin Sheedy special is not just Sheeds’ attendance at the camp — he has after all been coaching at ASC camps since his early days with the Essendon Bombers in 1983 — but the football lineage attached to Tyler’s surname. You see, Tyler just happens to be the son of former VFL goal kicker, Craig Davis, and brother of Swans premiership player, Nick Davis. Tyler’s father, Craig Davis, told ASC he was pleased to see Sheedy coaching at the football camp, and reminisced about his former playing days. During his VFL career in the 1970s-1980s as a full-forward, Craig himself lined up against the wily Richmond back-pocket, Kevin Sheedy. The first time they played against each other was in Craig’s first finals appearance, in just his third match of his debut season for Carlton, when the Blues took on Richmond in the 1973 Qualifying Final at the MCG in front of 86,386 fans. Craig recalls Sheedy getting the better of him on the day. “40 years ago I played my first final on Kevin [and] he taught me a lesson,” says Craig. Despite the Kevin Sheedy lesson, the 18-year-old Craig Davis still managed to kick 3 goals for the match, and the Blues finished 20 point winners. However, when the two teams met again 3 weeks later in the Grand Final, Richmond got the ultimate revenge, beating Carlton by 5 goals. Putting aside their old playing rivalry, Craig was rapt to see Sheeds coaching young footballers at the ASC camp. “Now he is sharing those lessons with [my son], Tyler Robert Davis.” In fact, Craig was pleased overall with the standard of the ASC camp, saying “Fantastic weather, great facility, outstanding coaches.” While we can’t control the weather, we do thank our outstanding coaches, including Kevin Sheedy, for making the NSW football camp a success. And we look forward to young Tyler, along with all our football camp participants, creating their own footballing dynasties in the future.